RMW Motorsport only lacked a little bit of luck! Last weekend the next round of ADAC Kart Masters took place in Ampfing.  A total of 126 drivers came to the Schweppermannring for the second race weekend of the transregional Kart Serie. Obviously, RMW Motorsport couldn’t miss it with its mostly young and new drivers. Drivers’ coach Christian Wangard sums up the race weekend: “With a little bit more luck we could have had better results. We simply had a few moments where we ran out of luck. The performance of the team was actually pretty amazing – when you consider the fact that it was only our second race of the season.“ In his opinion, the reason why they didn’t win more races was because of time penalties. “We took a step forward and are closer to the best of each racing class.  We are taking home a few goblets but that aren’t all the trophies yet that I would like to call ours“, the ambitious Koblenzer reveals.

Maddox Wirtz managed to land a fantastic second place in the second race of X30 juniors. Maximilian Dappert, on the other hand, missed the podium of X30 seniors with a sixth and fifth place. His team colleague Matteo Carrozza finished on position 26 and 22. In the racing class of OK seniors, Carl-Louis Kölschbach showed everything he got with an outstanding second place in time practice. During the first race, he was battling technical issues but in the second race, he made a comeback and drove from place 29 to place 18. 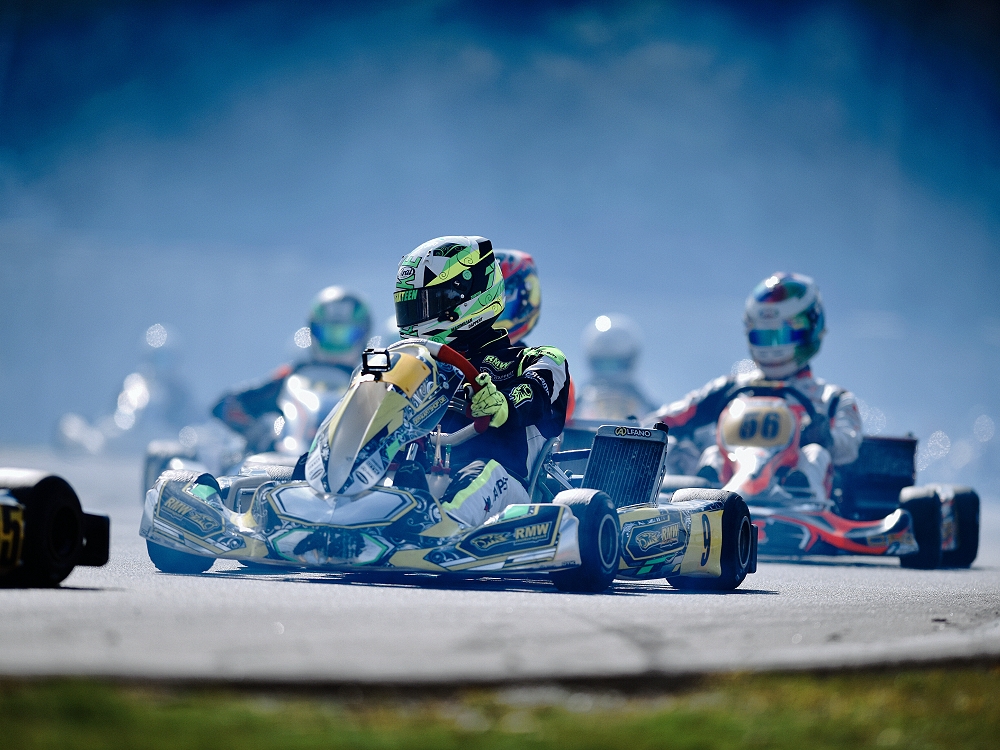 The ADAC Kart Academy was also part of the race weekend in Ampfing. For a few of the very young pilots, the weekend was already pretty successful. Lukas Gridjan ended two out of three races on the fourth position and one on the second position. Elijah Alessandro Saia drove to a third, fifth and eighth place. Lukas Schächer finished on place five and twice on place three. Luca Maximilian Wehrli two times landed on the sixth place and one time on the fifth place. His teammate Philip Wiskirchen placed 8th two times and managed to be 6th in the other race.

The upcoming weekend continues with the Westedeutsche ADAC Kart Cup in Wittgenborn for RMW Motorsport.  To what extent does that help for the ADAC Kart Masters? The drivers’ coach sees a few advantages: “Every kilometer is important. A few drivers that participated in Ampfing will be part of WAKC as well. You can see how some of them lack race experience. That’s why the boys will use the kilometers there to gain some more race experience.“ In his opinion, the young pilots have to learn how to optimize their focus during the races. “We’re trying out a few techniques, at the moment. We could already see the first successes with a few drivers. We probably use those methods for the whole team soon“, Christian Wangard explains satisfied.