Only one weekend ago, the Koblenzer RMW Motorsport Team used the ADAC Cart Cup in Oschersleben to prepare for the ADAC Kart Masters. Those took place last weekend (from July 6 to July 7) at the Motorsports Arena Oschersleben as well. RMW Motorsport boss Michael Wangard was optimistic after the ADAC Kart Cup the weekend before. How much optimism was left?  Were the Koblenzer able to deliver good performance? Driver’s coach Luca Lippkau summed up: “It was pretty hard for us. Weather conditions were completely different. One week ago, we had 36 to 38 degree Celsius. This weekend we only had around 20 degree Celsius and a lot of wind. Therefore, the kart set-up from the weekend before was history. We had to prepare our pilots for a whole different situation.“ 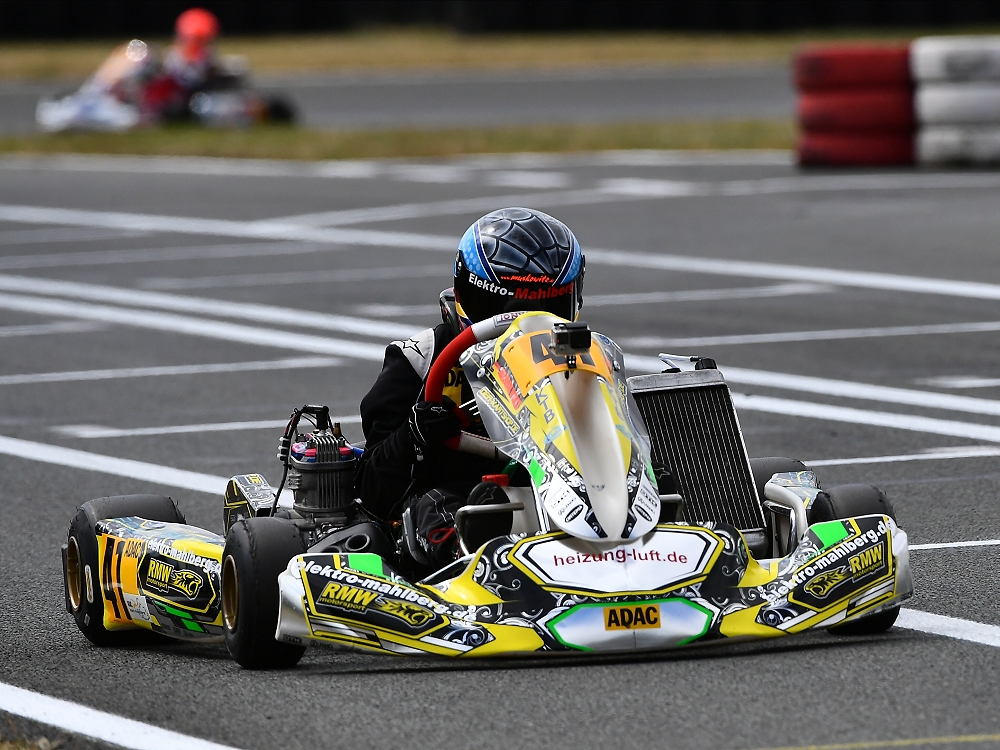 RMW pilot Maddox Wirtz was able to celebrate a highly successful weekend in the class of X30 junior. “I would describe it as a weekend without any mistakes. From time practice over both pre-races to both final races. Maddox showed all his class and completely deserved to land in the first place of the daily standing. Thanks to his great performance he collected several important points for the championship. He is second in the championship, at the moment“, Christian Wangard reported.

At X30 senior, everything was a lot more turbulent. “Even though our general speed was there the during the whole weekend, our drivers very really unlucky“, driver’s coach Luca Lippkau explained. Maximilian Dappert disqualified in his first final race and therefore had to start from the end into the second race where he finished with a 14th place of the daily standing. Matteo Carozza and Ben Fricke were not as lucky as him. Technical difficulties and accident resulted in a 25th and 28th place – a patchy weekend for the two of them. “There are these weekends where you don’t do anything wrong, and you are actually pretty fast, and you show a good performance, but some other factors set you back“, the 31-year-old Christian Wangard explained.

Carl-Louis Kölschbach also did not exactly have the luckiest weekend. Although he had used the previous weekend to prepare himself in the best way – we remember how he had never started in Oschersleben before – he had to deal with accidents and a loss in the final. Those results lead to a 16th place of the daily standing.

The five RMW pilots who participated in the Kart Academy Serie made it more exciting. With a little experience from the last year Philip Wiskirchen, Lukas Schacher, and Elijah Alessandro Saia started again this year. Lukas Gridjan and Luca Wehrli, on the other hand, participated as two absolute rookies. Christian Wangard analyzed the weekend in the following way: “Luca Wehrli has been here in Oschersleben last weekend at ADAC Kart Cup to prepare himself for the race this weekend. It was fun to view his steady performance. He was the best example that practice really pays off. The other guys were fitting in rapidly as well – especially when you consider the challenging race track and the incredible power density of the ADAC Kart Academy. Two of our drives drove a little too wild. The two of them were involved in a team accident. That is why they didn’t land good results. Even when they are getting faster, luck and experience play an important role during a race.“ The two rookies Luca Wehrli and Lukas Gridjan ended their race weekend on the second and third place. Elijah Alessandro Saja, Philip Wiskirchen, and Lukas Schächer raked the fourth, seventh and eight place to themselves.

After a small summer break, RMW Motorsport will start at the WAKC from August 10 to August 11 – at their.